The next console generation is approaching and people want to know what games the new consoles will launch with. On the Xbox side of things, most of us are expecting to see a new Forza title, specifically an entry in the Forza Motorsport series.

We know a Forza game is in the works over at Forza Motorsport developer Turn 10. After Microsoft let the series rest for a year, it would make sense for us to see one this year and for it to demonstrate the power and ability of Microsoft’s new console. Just as Forza Motorsport 5 did for the Xbox One.

Motorsport 5 certainly looked impressive, but overall it failed to meet the usual high standards for a Forza game. Subsequent efforts have improved but I still have some suggestions that could make the next game the best in the Motorsport series and keep it from repeating 5’s mistakes.

Obviously more tracks are always a wish for new Forza’s. They are one of the most important aspects of a racing game, and the more the better.

But all of the courses in Forza currently, are modern circuits, that are representative of how the track is at the time of the game’s release. But what if we got some historic tracks and historic versions of modern tracks?

For example, the Brooklands race track in England. It may not be the most intricate technical place to drive on, but it was the first purpose-built race track and is a key part of motorsport history. I think it would fit in a game with Motorsport literally in its name.

Or what about an old school version of Spa-Francorchamps, with its long stretches of public road and banked turn. Or classic versions of brands hatch with its revisions over the years changing the layout. More historical courses like Silverstone or Monza also come to mind. All four of the tracks mentioned have their current iteration in the latest Forza Motorsport title.

Classic circuits would help increase the tracks count while providing variety with the contrast of the more safe modern courses to the older ones. It’ll also give us a place to push vintage racers to they’re limits on circuits they would have raced on back in their day.

Forza seems to have made up its mind on how it handles progression and car unlocks with its quick earned credits and supercar unlocks in the first 15 minutes.

I can see why they do this, it allows more people to experience the high-end cars they want to drive. Casual players may not want to grind and progress through the more mundane cars to be able to take the cutting edge hypercars for a spin.

But personally, I think a balance between earning credits at a good speed, that feels like I can obtain more expensive cars, all while actively making me play the game and use the cheaper cars to get to the pricier ones, is the best way to handle progression in Forza.

This will make you feel more attached to your cars. Each car plays a role in your progression, each apex, chicane or hairpin aids in your bonding with each car.

The sense of speed, control and overall feeling of exotic cars will feel more impactful too if you’ve had to spend more time in slower cars.

Drift events and Drag racing have been implemented into Forza more as the years have gone on.

Online drift events have been a thing for quite some time now in Forza and a Formula Drift car pack along with a special cockpit drift camera are in Motorsport 7. Drag racing is also an online mode that has been present in Forza, and in Motorsport 7 it received an upgraded mode. But neither have seen the same kind of love in the career modes.

Having to build a drift or drag car and using them in the career could spice things up and provide new challenges. From the car setups to driving your car in a completely different way, both events would be a good addition.

Just like tracks, cars are very important to racing games. The car list in Forza always sees an overall number increase (unless you’re Motorsport 5), but we could always do with more. Especially some more odd or little known cars.

Forza Motorsport 4 did quite a good job of this, having cars such as the Delorean DMC-12, Gumpert Apollo, Aston Martin Cygnet, Mazda Furai or Smart Car. However, none of these cars are in the latest game. It’s fun to play around with cars you won’t find in a lot of other games. Some of these cars have cult followings, so when they appear it can please niche audiences and it exposes these cars to people who may have never known they existed.

Forza Horizon 4 had done well in this aspect. With vehicles like the Relient Supervan and Austin FX4 Taxi, but there are more I would like to see, especially as some have appeared before.

And how can a game like Forza Motorsport 7 which features the Top Gear test track not have the Kia Ceed or Suzuki Liana GLX, come on now! Off-road racing is a big ask, but even if we had only a small selection of off-road tracks or stages it would potentially solidify the upcoming release as the best in the series.

Forza already has cars like Subaru Imprezas, Mitsubishi Lancers and the Ford Raptor. Therefore no new special off-road cars would need to be added.

I don’t think Forza should focus on the off-road primarily. But maybe a few rallycross races or rally stages, similar to how Gran Turismo deals with its rally events. It would be enough to be meaningful but not take away or hamper the main experience

Along with your typical single-player modes, I feel a mode that focuses on famous stories and races from real-life motorsport would be an interesting experience.

Image reenacting Ford’s victory over Ferrari at Le Mans, Porsche’s 919 Evo Nurburgring lap record or Peugeot’s Le Mans win in 2009. Getting to take part in these important moments in racing’s past should be sure to please petrol heads.

This one isn’t really the biggest thing Forza should worry about, but improved damage models would be nice. Seeing the dents, scrapes, and missing parts after an intense race, each with its own story behind it would be neat.

It’s true that Forza already has vehicle damage but it’s nothing special. And I understand manufacturer licensing can put limitations of things like this. And I value the cars more than the car damage. But I would still like to see it improved if it can be.

Forza Motorsport 7 has endurance racing events in its career. Though they fail to really capture the essence of endurance racing. No driver swaps or time of day progression makes the races just feel like longer standard races.

If endurance racing makes a return (which it should) then we need to have pit stops and a day and night cycle in the race. The change in lighting will not just keep you on the ball, but force you to adapt your driving accordingly. These changes will help endurance events stand out in the sea of other events.

If we are going to have endurance races that require drivers to pit in, then we are going to need proper pit stops. I’m talking fully animated, with pit crew changing tires, refueling and potentially drivers swapping if the race in question calls for a swap.

This is opposed to the current pit stops which see the driver pull into an empty pit lane and sit there for a bit before driving off again, it’s pretty lame.

Not only will it look cool, but it’ll also make the racing feel more immersive and cinematic. The scramble and frankly insane speeds of pit stops are a big crucial part of racing. It only makes sense to have them presented better.

Forza Motorsport 6 ended up with a NASCAR expansion and Motorsport 7 gives you the opportunity to drive NASCARs again as well as IndyCars. And the pit stops in those races in real life are impressive and a staple on the racing series’s. But they aren’t really here in the game.

Aswell did anybody else noticed that some promotional material for Forza Motorsport 7 showed a pit stop, with a driver swap and pit crew, but nothing like it was in the final game? 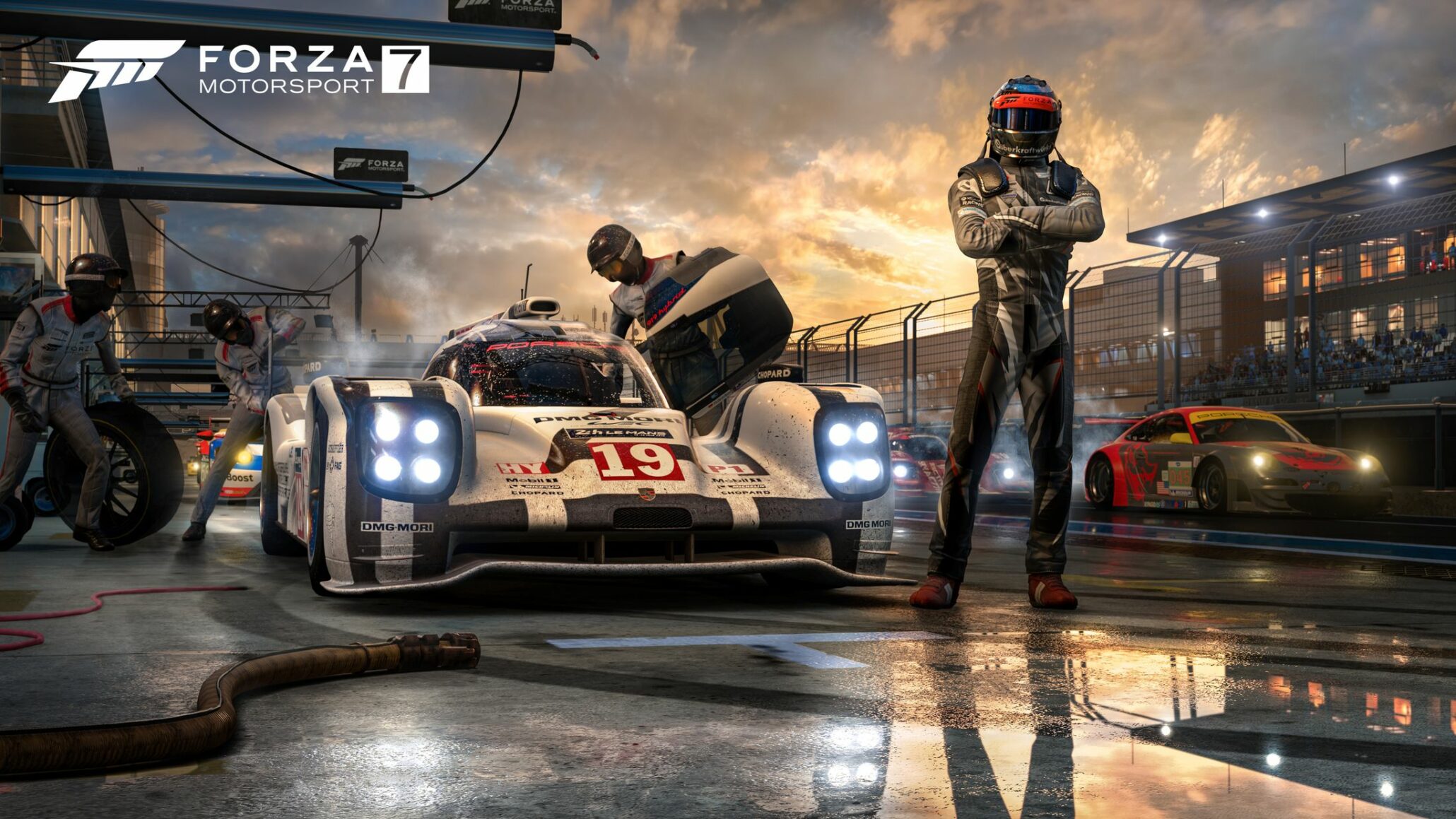 September 22, 2019
We use cookies to ensure that we give you the best experience on our website. If you continue to use this site we will assume that you are happy with it.OkNoPrivacy policy