When I first heard about “Tetris Effect“, I assumed there was nothing special about it. How can you make “Tetris” any more interesting than it already was? We have seen different incarnations of “Tetris” over the years. We’ve seen it on a Gameboy and we’ve seen it played against 98 other players. “Tetris Effect“, however, is something completely different and yet so familiar. It surpasses the realms of space and time to create something unique and otherworldly.

Tetris gameplay has always been iconic. No matter where you go there is always another incarnation of the game with the same basic gameplay. However, “Tetris Effect” washes over you like a tidal wave. It surrounds you with sight, sounds, and feelings that completely engulf you in the experience. It is a sensation that is not easily put into words. 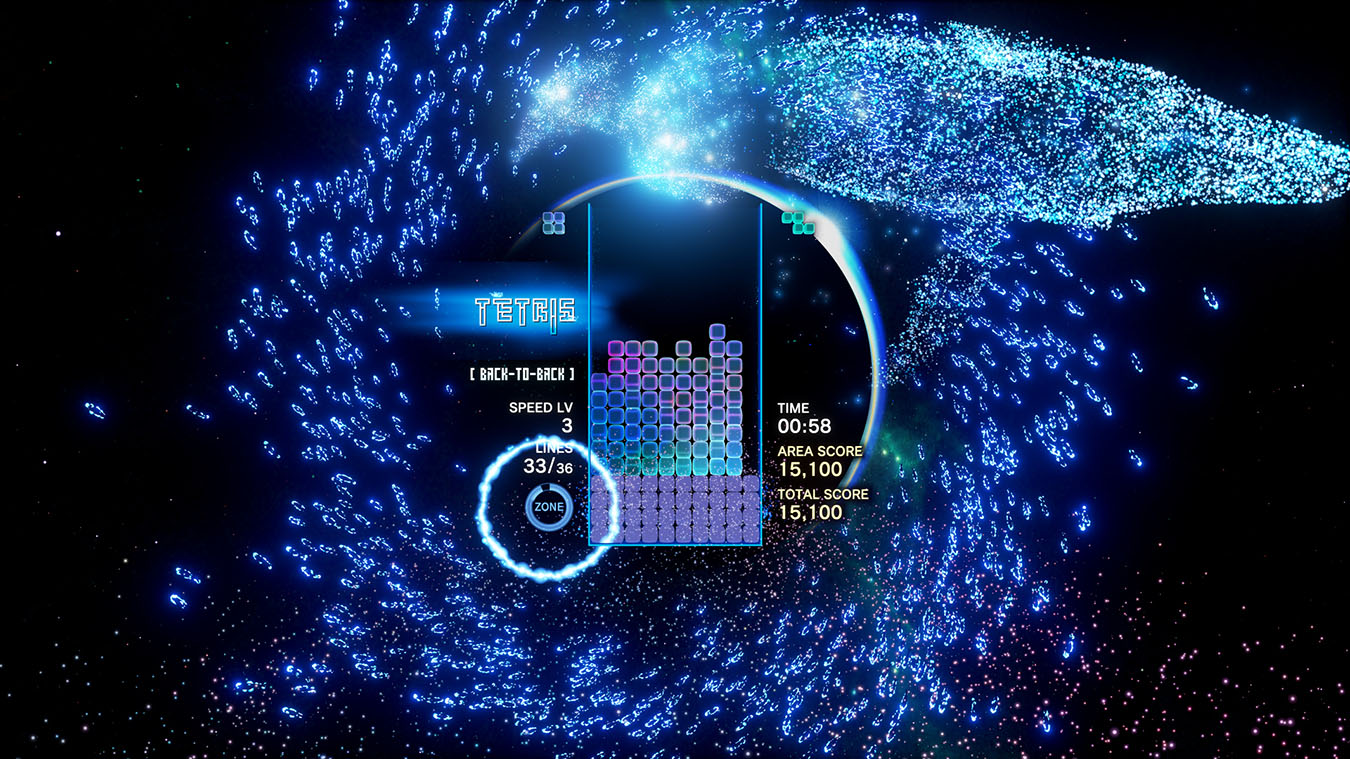 “Tetris Effect” does not feel static. It feels vibrant and alive. Like the world around us, it is constantly changing. Simple backgrounds spring to life with each line that you make. Blocks are not the usual colors either. Each stage has its own set of blocks that fit in with the theme. You’ll be rotating gears, hard sand, and even bubbles to the beat.

Showing pictures of the modes can only give you a visual example of the true experience. “Tetris Effect” is best played wearing headphones or with surround sound. So if you have them, put them on now and check out the launch trailer for “Tetris Effect“.

Effects Mode is a free play selection that allows you to experience any of the levels to your liking. In many ways, this mode is the most therapeutic, with options for a more relaxing experience or aesthetic. There are a variety of compilations already premade for every occasion. So be sure to try each one and find your favorite.

Effects Mode also offers some challenges for those that want something a bit harder to chew through. For those with the drive to push themselves even further, Masters Mode can really put you to the test with almost instantaneous block drops. You will need to have razor-sharp reflexes to reach 150 lines.

Additions to the Difficulty

It is very easy to ramp up the difficulty of a game by adding new blocks or a new objective during normal gameplay. “Tetris Effect” doesn’t need this and only lightly changes the gameplay. Instead, it lets the art and design do the difficulty ramping. As mentioned before, blocks have their own unique designs for each stage. Because of this, it manages to up the difficulty by forcing the player to pay closer attention to the blocks as they descend.

One of the only new additions to the core gameplay of journeys and effects mode is the Time Stop ability. You can charge up the meter by completing lines and use it to get yourself out of sticky situations. This is especially useful later in the game when the music and the speed become more fast-paced. Lines finished while using this ability don’t count towards the objective, however, it will help you stay afloat longer. 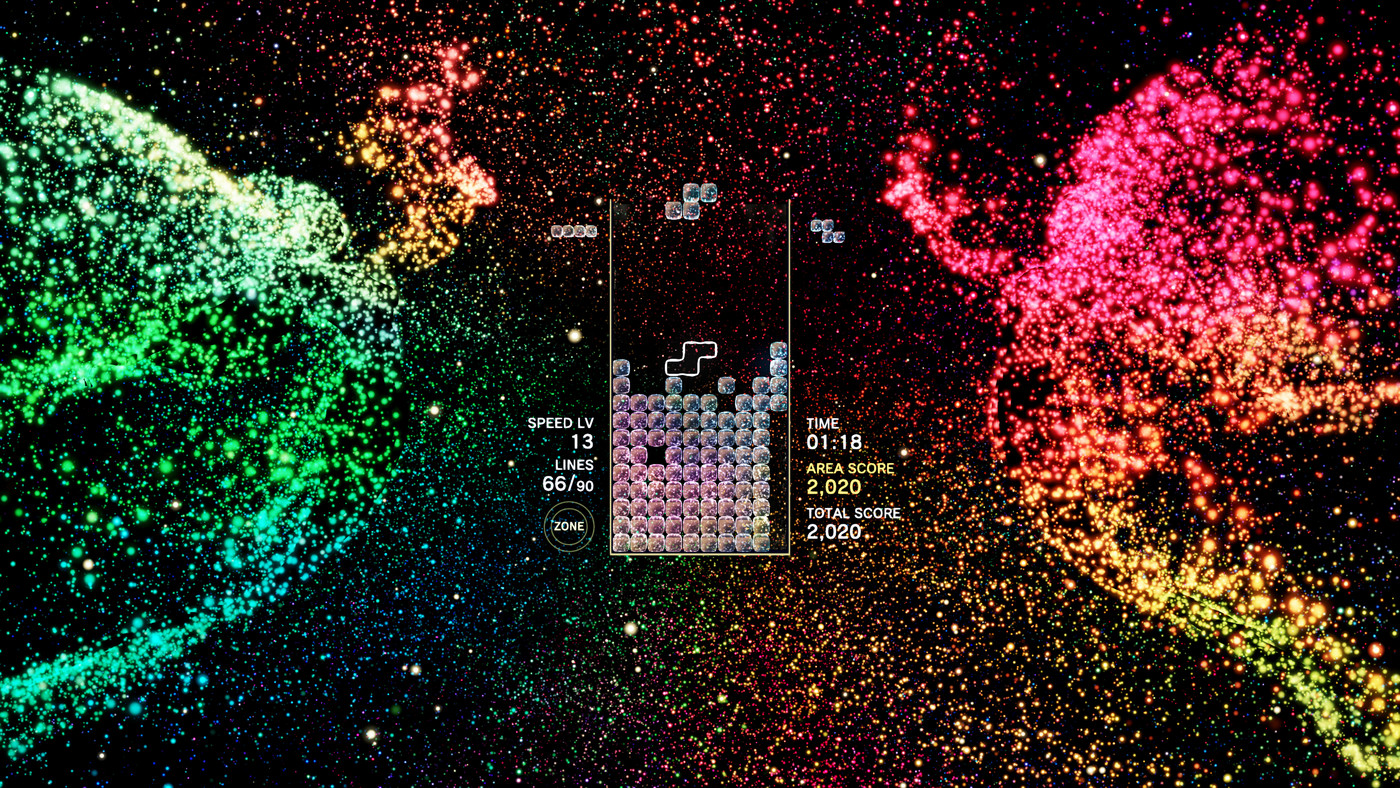 In some ways, “Tetris Effect” plays with your mind. It is very easy to let the music and the beats carry you away. Each rotation of the blocks only adds to the music to the point where you become unsure if the sounds are being made by you or just naturally part of the composition. Sometimes the music will be slow and peaceful while other times it will be strong and turbulent. The speed of the falling blocks will also alternate accordingly.

“Tetris Effect” has competitive and co-operative gameplay to fit your mood. You can either play against an Ai or you can go head to head against other players. There are many avatars to unlock by completing achievements and milestones, which can then be used to represent yourself during online play.

Connected mode pairs up players in teams of 3 to take on a series of zodiac bosses. Each player has their own screen where they must complete lines. Every now and then, all three screens combine into an even bigger playable area where all 3 players must take turns placing blocks. Luckily the game gives you notice of where players intend to place their blocks so you can plan accordingly without needed a microphone to coordinate.

Zodiac bosses have their own abilities as well. Aside from completing their own rows, they can also interfere with your screen by adding or subtracting blocks. Zodiac bosses also have the ability to call upon huge chunks of blocks. Players will need to figure out how to place these to minimize damages.

Competitive play is also available in Zone Battles. The concept is similar to “Tetris 99” where each player forms lines in order to push up their opponents further to the top of the screen. The only differences are the 1v1 gameplay and the time stop function. Like, the main game stopping time gives you a chance to wiggle your way out of a jam. 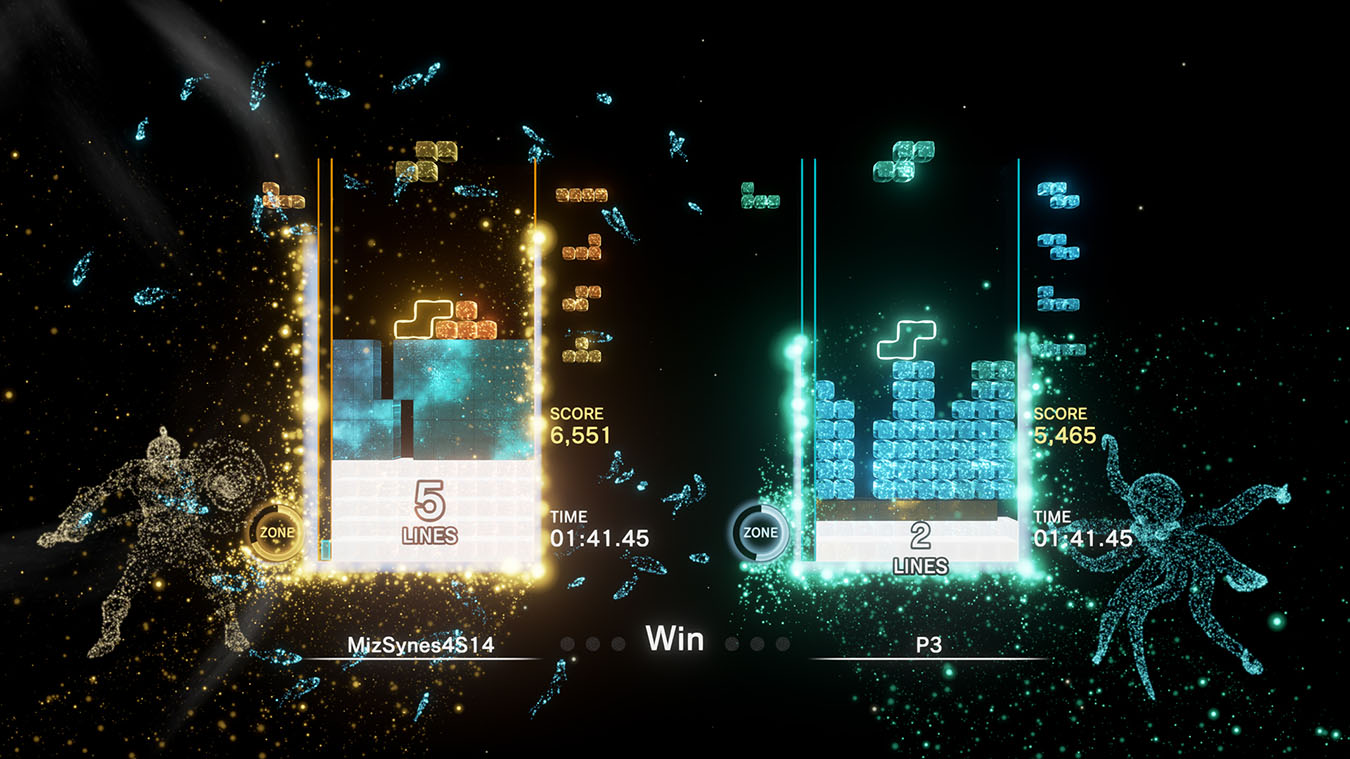 There are also more traditional competitive modes that remove the time stop button and increase the speed as the game progresses. This is a must-play for those that like the classic gameplay over the new additions

“Tetris Effect” was previously a PS4 Exclusive. However, it is now available on Xbox One and the Xbox One Series X. Subscribers of Gamepass can get immediate access to the title. I highly recommend it for those who are either a fan of puzzle games or are looking for something whimsical and psychedelic. So check out their website or game page and prepare to dive deep into an experience like never before.